(by Kenan Walden)
Aeschylus, Sophocles, and Euripides are three of the best-known Athenian tragic poets. 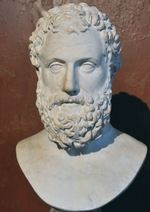 Aeschylus was known as the “Father of Tragedy.” He was once sent as a child to watch grapes ripen in the countryside. When he fell asleep though, Dionysus appeared to him in a dream and commanded him to write tragedies. So, Aeschylus began a tragedy the next morning, and he succeeded.

As far as innovations to plays go, Aeschylus tried to incorporate more actors into his plays and tried to get the chorus directly involved in the storyline of the play rather than just having them exchange dialogue. He addresses intricate religious problems. Some of Aeschylus’ most famous plays include:

* Agamemnon, where he describes how the gods punish a family for a series of murders.

* The Persians, in which the Athenian victory at Salamis is celebrated.

* Prometheus Bound, where the myth of Prometheus, the world's first humanitarian, is discussed. 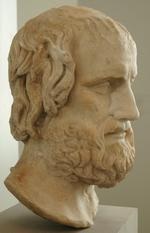 Euripides, who was the son of Mnesarchides, was destined from his birth to be a misunderstood poet. He presented his first group of tragedies at Dionysia in 455 B.C., but didn’t win his first victory until 441. As a matter of fact, he won only five awards--and the fifth one wasn’t awarded until after he died!

This lack of recognition might seem a bit odd when you consider that Euripides wrote about ninety-two plays and was comparedto the likes of Aeschylus and Sophocles. The main reason that Euripides was ignored by the judges of the Greek festival because he did not cater to what the Athenian crowd wanted to see or hear. He didn't approve of their superstitions and refused to accept their moral hypocrisy. Most of his plays dealt with many personal issues, so they had a tendency to include common, ungodlike people.
Some of his famous plays include:


* Hippolytus and The Bacchae, where he explores the psyche of men attempting to deny a natural life-force such as sexuality or emotional release.
* Medea, where he takes a look at the frenzied jealousy of a woman who has lost her husband's interest.
* Hecuba, in which he documents the cruelty of Greek warriors who enslave the Trojan queen and sacrifice her daughter at the tomb of Achilles. 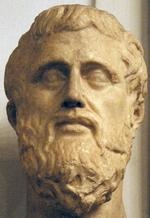 Sophocles was destined to become one of the great playwrights of his era. Since he was the son of a prosperous merchant, he would enjoy all the luxuries of a flourishing Greek empire. He studied all of the arts. By age sixteen, he was already known for his “beauty and grace” and was chosen to lead a choir of boys at a celebration. After he completed his studies twelve years later, was ready to compete in the City Dionysia (which was a festival held every year at the Theatre of Dionysus in where new plays were presented).

In his first competition, Sophocles took first prize, actually surpassing Aeschylus himself. More than 120 plays were to follow. He would then go on to win eighteen first prizes, and following that he would never fail to take at least second.

Sophocoles abandoned the trilogic form (telling one story using three separate plays) in his plays, and packed the story into a shorter, more concise form that allowed for more dramatic possibilities. Some of Sophocles' plays include:


* Oedipus the King, (which is generally considered his greatest work) explores the depths of modern psycho-analysis as Oedipus unwittingly kills his father and marries his mother in an attempt to avoid a prophecy he fulfills anyway.
* Antigone, describes the tale of a passionate young woman who refuses to submit to earthly authority when it forbids a proper burial for her brother, Polyneices.
* The Women of Trachis, which offers a touching story of a jealous woman (Deianira) and her husband (Heracles).

Typical Structure of a Tragedy

The Tale of Oedipus 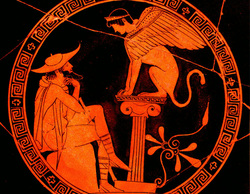 While Sophocles' Oedipus the King is considered his greatest work by many people, because it begins in medias res, the story of Oedipus prior to the start of the tragedy is not explicitly stated, so let's dive into that, shall we?


Laius, king of Thebes, marries Jocasta, but they are childless. Laius goes to Delphi and intends to ask Apollo's advice; Apollo announces that Laius will have a child who will kill him. Laius and Jocasta have a baby son (Oedipus) whom they plan to kill. The royal shepherd is ordered to dispose of the child on Mt. Cithaeron. He can't bring himself to do this, so Instead he gives Oedipus to the royal Corinthian shepherd.The Shepherd takes the child back to the childless king and queen of Corinth (Polybus and Merope), who adopt him.


At about the age of 18, at a dinner party, one of Oedipus' friends makes a rude remark about his not being a real Corinthian but only adopted. Oedipus is shocked and shamed, and goes off to Delphi to ask Apollo about the truth. Apollo tells Oedipus he is doomed to kill his father and marry his mother. Within hours, Oedipus (accidentally) kills his father.  Following this, he learns that the Sphinx is threatening the city of Thebes, and that whoever kills it will have Jocasta's hand in marriage (who, incidentally, is Oedipus' biological mother.) So, Oedipus kills the Sphinx by solving a riddle, he is received at Thebes as a national hero, and marries Jocasta.


Oedipus and Jocasta then have four children: Eteocles, Polyneices, Antigone, and Ismene.